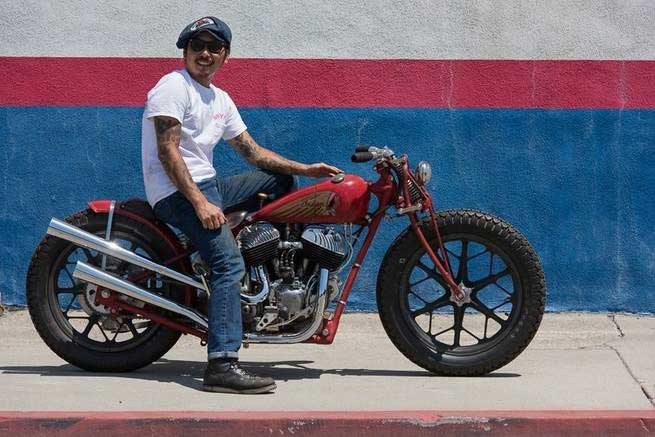 Indian Motorcycle was still turning a profit in 1941 and the decade saw some of the most stylish bikes in the company’s history. Part of that was because R&D had taken a back seat to keep the company in the black with form picking up the slack. Ultimately, that strategy lead to Indian's downfall in the long term. But for the time being them bikes looked mighty fine, yessiree Bob.

go9
There’s always room to look better though. The stock 1941 Indian Chief didn’t look like this. Parts of it did; the motor, the fork have a similar leafblade look. But when Go Takamine set about bringing the twin powerplant back into action in the 21st century, the shop did it in such a way that it’s both obvious and subtle that this isn’t a resto job. It is, as Takamine labels it, brat style.

No valanced swoopy fenders or gigantor of a solo seat riding high on a post; none of that classicized Indian haberdashery of old. Instead, you get a leaner, meaner Indian Chief with a chopped fender hugging a svelte skinny back tire set in a 1927 hardtail frame with an old Junior Scout fork. The whole bike seems to be answering the “What if?” of what would have happened if the chopper and café-racer crazes had taken off in the early 1940s instead of the 1960s. Looking at this brat in detail, I’ve got to say that’s one helluva an answer to that question!